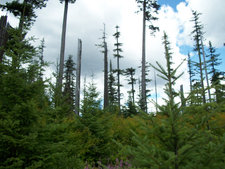 Running through land Managed primarily by the Mount Hood National Forest, the Collawash River flows through deep basalt canyons on its way to the Upper Clackamas. Alternating between extreme whitewater and deep green pools this part of the river lies in a remote area of the Bull of the Woods Wilderness.

At least a dozen lakes can be found among the peaks and ridges of the surrounding area and a 68 mile trail system winds its way through the old growth Douglas Fir, western hemlock and past deserted mine shafts. If you’re very lucky you might even spot a Northern Spotted Owl.

In the context of the entire Clackamas River, this portion of the basin is critical for the production of wild fish. Coho, spring Chinook, steelhead and resident cutthroat and rainbow trout spawn and rear in the watersheds of the Collawash and surrounding rivers. Because of the upper basin’s importance for wild fish, it is important to restore degraded areas and protect high quality habitats.

I live here, what can CRBC do for me?